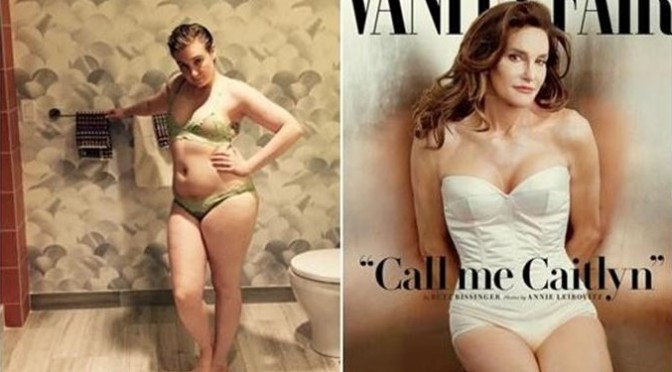 Last week, the Internet praised Lena Dunham for posting a picture of herself in her underwear on Instagram. One writer at Bustle called it “badass and fearless,” while a writer at Mic described it as “Feminist empowerment.” This week, Caitlyn Jenner (formally known as Bruce) unveiled her new female self wearing a corset and matching high-waisted panties on the cover of Vanity Fair, and again the Internet rejoiced.

A part of me also cheered along with the Internet. It’s powerful seeing people who don’t fit the conventional standards of what it means to be “beautiful” or what it means to be a “real woman,” flaunt their bodies instead of hiding them. For years, I hated the way my legs looked so my solution was to never wear shorts or short skirts ever; not even to the beach. Eventually, I gave up on that nonsense, but to this day, a simple and practical act like wearing shorts on a hot, humid day, to me feels like a rebellious act— like I’m giving a giant middle finger to the body-shaming voice in my head.

But my question is this, if Lena Dunham were a size 2 or if Caitlyn Jenner were a cisgender woman under the age of 40, would seeing them posed in their underwear be getting so much praise? It seems unlikely. The difference between whether or not something gets labeled exploitation or empowerment comes down to the woman engaging in the act, and not the act itself. When white, cisgender, slim, relatively young women, who don’t have an obvious disability are sexualized, people are often quick to view this as being objectifying and degrading. However, when women who don’t fit that description are sexualized, this is often celebrated and called “body positive” and progressive. In fact, if a traditionally sexist organization wants to be considered forward thinking, all it has to do is promote a woman who’s been marginalized in some way.

This was the case earlier this year, when Sports Illustrated featured a plus-size model in a paid ad for their annual Sports Illustrated swimsuit issue, or when Playboy magazine broke racial barriers back in 1965 by featuring an African-American “Playmate.”

While I give a serious side-eye to magazines that have historically portrayed women as sex objects looking for a pat on the back for having a more inclusive beauty standard, most proponents of the “beauty comes in all colors, shapes and sizes” mantra do mean well. They believe they are promoting acceptance and self-love, but at its core this message is just as harmful as traditional body shaming. This is because regardless of whether or not someone is promoting narrow beauty standards, or instead opening their doors to include women who don’t meet these standards, the emphasis is still centered on a woman’s appearance. So often, these feel good messages, which encourage women and girls to build their self-esteem through their appearance, wind up sending the harmful message that despite your other attributes, ultimately what matters most is how pretty or sexy you look.

“The Daily Show’s” Jon Stewart did a hilarious segment about the media wasting no time treating Caitlyn Jenner like it does all women, by showing clips of people commenting on her “comparative f*ckability.”

“Caitlyn, when you were a man we could talk about your athleticism, your business acumen,” he said. “Now you’re a woman, and your looks are really the only thing we care about.”

But it’s not just people in the media placing so much importance on a woman’s appearance. In an effort to feel good about themselves, women often use social media to validate their beauty. This is what Dunham seemed to be doing when she posted that underwear picture on Instagram. But it seems odd that she, of all people, would care what the world thought of her body. Despite her youth, Dunham is a wildly successful writer, director, produce and actor. By her late 20s, she had already directed an acclaimed film, got her series greenlit by HBO, been nominated for several Emmy Awards, and wrote a book that made the New York Times bestseller list.

Perhaps this is what makes her need to seek validation based on her appearance even more troubling than if she were just an actor. After all, you never see successful male directors, writers and producers concerning themselves with whether or not society considers them hot. Imagine Matt Weiner, the creator of “Mad Men,” or Vince Gilligan, the creator of “Breaking Bad” posing for pictures of themselves in their underwear and having everyone applaud them for this. It would seem pretty silly, right? So it should be equally ridiculous when someone as accomplished as Dunham does it.

But instead of criticizing women who feel the need to post sexy selfies and kissy-face glamour shots on social media, we should instead be sympathetic to the fact they’ve internalized sexist standards.

This is what makes both Dunham’s and Jenner’s struggle so relatable.

But posing in your underwear doesn’t show the world that you’re comfortable in your own skin— it shows the world that you need strangers to tell you that you’re acceptable. If women really to want practice self-love and body acceptance they shouldn’t feel the need to put their bodies on display for the world to judge; instead they should celebrate and promote the parts of themselves that no one can see.