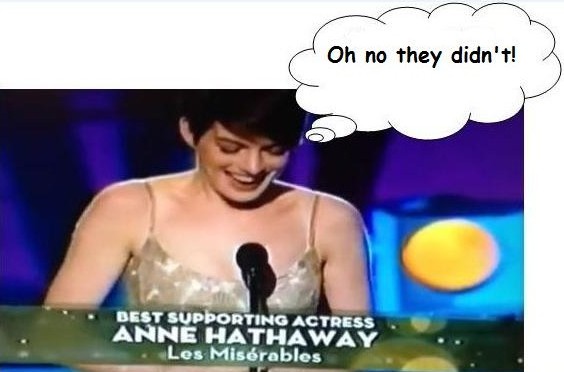 First Anne Hathaway did the “gauche” thing during her acceptance speech at the Critics’ Choice Awards by pointing out that her first name was misspelled in the Best Actress montage.

Now it appears Jennifer Lawrence made a similarly tone-deaf remark when she accepted the Best Actress nod at the Golden Globes.

What does it say?” she asks looking at the statue, “I beat Meryl.”

There was audible rumbling in the audience. Click here to check it out. But according to Access Hollywood she meant no disrespect. The comment wasn’t a dig at the screen legend, Lawrence was trying to channel her inner funny by quoting Bette Midler in 1996’s “The First Wives Club” (was Jennifer even alive when that came out?)

So let me see if I have this right. A 22-year-old quotes a comedy about middle-aged divorcees being dumped for younger women as she accepts an award in which she not only beat Streep but also Dame  Judi Dench (78) Maggie Smith (also 78). How apt!

Perhaps both Hathaway and Lawrence could use a little reality check courtesy of Bette Davis in the classic “All About Eve.”

For those of you haven’t been lucky enough to see the 1950 movie, here’s the gist: Davis plays an aging Broadway star, who takes Eve, a young fan, under her wing. Eventually Davis discovers that docile Eve is actually scheming to take over her life.