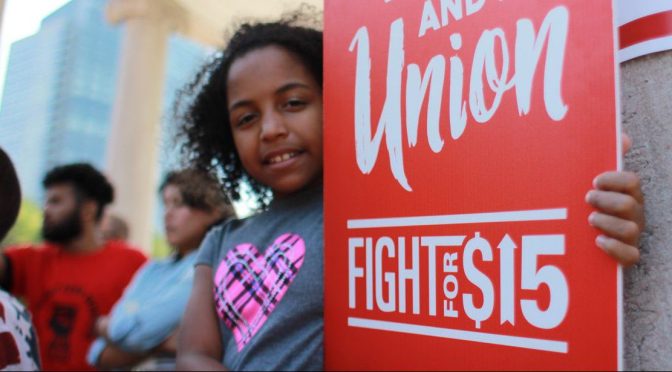 This Labor Day, there were (of course!) the usual “thank a union” shout outs…

The POTUS tweeted something about American hands and the future…

…and was later dragged when it was discovered that Melania’s $2,255 dress was made in Italy.

Thank then the Italian union workers and Greek designers for Melania’s dress !!

But amidst all the love for unions and American body parts, this year people were tweeting about the #FightFor15, as fast-food workers seeking a $15 minimum wage, staged rallies across the country.

RIGHT NOW: Chicago fast-food #WorkersStrikeBack as they kickoff #LaborDay in Chicago in their #FightFor15 and a #union! pic.twitter.com/5cuavBZdvQ

Of course, not everyone thinks raising the minimum wage to $15 an hour is a good idea. Some insist that this will inevitably lead to workers being replaced by machines…

This is what you’re going to get with your stupid #FightFor15 campaign. Kiss your jobs GOODBYE!#WorkersStrikeBack#LaborDaypic.twitter.com/OHX1h02mzX

Liberals want fast food workers to get $15 an hour. Good luck being replaced with these. Cause I will not pay more for FF #WorkersStrikeBackpic.twitter.com/foflpKjtXT

There’s also that one mindfuck quote by Murray N. Rothbard that made the rounds about how, when you really think about it, increasing the minimum wage doesn’t just lead to layoffs, it’s the same thing as outlawing jobs!

#WorkersStrikeBack
If only the unlucky workers hurt by minimum wage laws could strike back, unfortunately they’re struggling on $0/hr pic.twitter.com/cHSb0i6o4w

Others seemed to champion something that sounds an awful lot like class discrimination, by arguing that fast food workers aren’t real workers and therefore shouldn’t be entitled to fancy perks like a living wage.

Lack of opportunities is not the problem. It’s lack of preparation. Flipping burgers and being rude is not a career. #WorkersStrikeBack

Speaking of entitlements, some pointed out that if we raised wages for the poorest and stopped letting the extremely wealthy wriggle out of paying taxes, we’d address our growing debt and a little problem known as income inequality.

And speaking of income inequality, some pointed out that it’s not such a little problem after all…

Other people highlighted the minimum wage in other countries.

But in the end, this simple, cut-through-the-bullshit tweet summed up the situation better that any meme or chart.

When working full time at minimum wage pays only $250 per week there are a problem with wages, not workers #LaborDay2017 #FightFor15

On behalf of “not real workers” everywhere…slow. clap.